One of Elevate’s longstanding clients, Theo and Paul Epstein’s Foundation To Be Named Later (FTBNL), is hosting another signature Hot Stove Cool Music concert on Tuesday, March 18 at 7:00 p.m. ET. The evening, which celebrates music, baseball and giving back, raises critically needed funds to support the next generation of diverse leaders through the FTBNL/Peter Gammons College Scholarships and their nonprofit partners.

The evening will kick off with a powerful a cappella performance by members of FTBNL beneficiaries Zumix and West End House, who are also recipients of FTBNL’s Gammons College Scholarships. As a part of the hour-long show, FTBNL co-founder Paul Epstein and Allyce Najimy, CEO of FTBNL will moderate a panel on the impact of the pandemic on our youth and what has been done to support them with Ron Burton Training Village’s Director Paul Burton and Chicago Cubs Executive Director Alicia Gonzalez.

Tickets (VIP & GA) are on sale now at ftbnl.org and start at a $10 donation, with all proceeds benefitting Theo and Paul Epstein’s Foundation To Be Named Later. There will also be a special virtual auction during the show featuring Pearl Jam, baseball, restaurant and music items.

All proceeds from the event, which is presented by Google, Cincoro, DraftKings, Baseball Fantasy Camp for Kids will benefit FTBNL. The Epsteins founded Foundation To Be Named Later in 2005 as a means to create positive change and provide important opportunities for youth and families from underserved neighborhoods in Boston and Chicago.

Ticket sales from the show will allow FTBNL to continue its work providing critical resources, including food, tuition grants, laptops, internet, housing, transportation, emergency grants and care packages to those who have been affected by the pandemic.

Elevate has conducted media reach out about the upcoming event, landing stories in publications and broadcast like Rolling Stone, The Boston Globe, Chicago Sun Times, SiriusXM, MSN and others. Read through the Rolling Stone and Globe articles below.

The Boston Globe, Hot Stove Cool Music steps up to the plate for charity once again 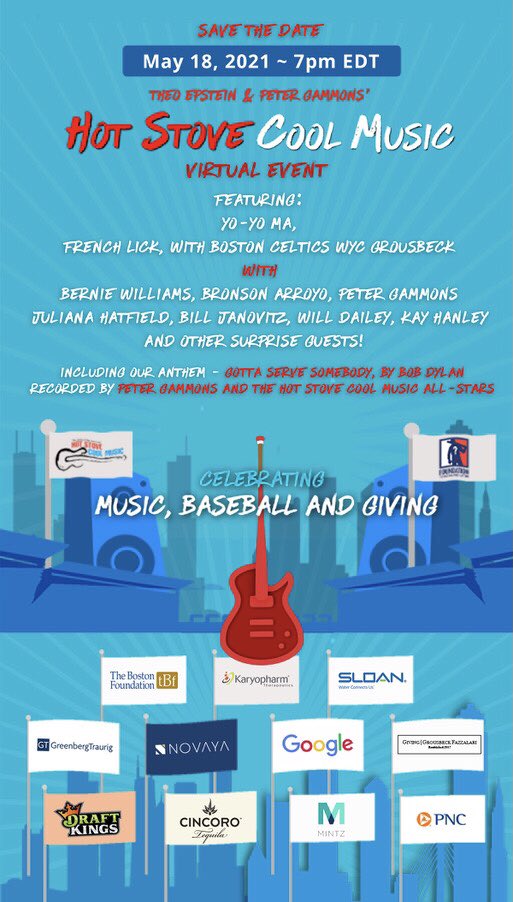