As the 2020 Olympic Team apparel sponsor of USA Gymnastics, GK Elite competitive leotards will be worn by both the women’s and men’s gymnastics teams at the Olympic Games Tokyo 2020

Reading, PA (July 15, 2021) – GK Elite, the world’s leading brand of gymnastics competitive and training apparel, will be worn by Team USA gymnasts on-mat at the Olympic Games Tokyo 2020 through its official apparel sponsorship of USA Gymnastics, the National Governing Body for the sport in the United States. Although GK has been the manufacturer of previous Olympic Games garments, this will mark the first time that GK Elite’s branding will appear on leotards and apparel worn by the women’s and men’s gymnastics teams at the Olympic Games, an honor previously held by Under Armour and Adidas. 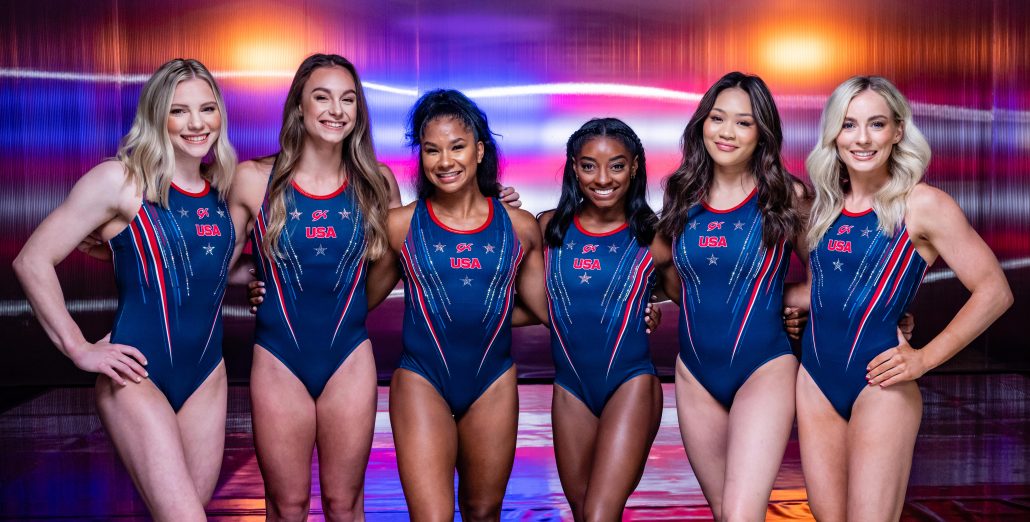 “GK Elite has a rich heritage as the leading apparel for competitive gymnasts and we are proud to have our brand represented on the sport’s greatest stage by Team USA,” said Girisha Chandraraj, President and CEO of Elite Sportswear. “We are thrilled to continue our partnership with USA Gymnastics as we collaborate to encourage and inspire gymnasts across the world to feel and perform their best. We are proud to represent Team USA in Tokyo and look forward to cheering on the women’s and men’s teams as they go for gold.”

The designs being worn by Team USA will be unveiled on-mat during competition in Tokyo. The leotards and men’s apparel all incorporate strong design cues that insight a sense of patriotism, strength, and confidence. Additionally, the women’s leotards are each adorned with thousands of radiant Swarovski® crystals, providing epic sparkle to every athlete’s look that will be sure to capture the attention of all, and giving each leotard a shine that will stand out on the competition mat. Examples of the patriotic themes of the leotards include the Women’s Team Final leotard featuring 7600 Swarovski® crystals and another competition leotard with 76 hand-applique stars—nods to the United States’ independence in 1776.

Each Olympic Games garment was designed with the athletes in mind. All the uniforms are made in the USA, having been designed, cut and assembled at the Elite Sportswear headquarters in Reading, Pennsylvania. A limited production of replica leotards and men’s shirts, also made in the USA, will be available for purchase following the competitive leotard and apparel debut during the Games on gkelite.com.

“GK Elite has been a valued partner of USA Gymnastics for over two decades, and we know they share our commitment to supporting gymnasts at all ages and across all disciplines,” said Li Li Leung, President and CEO of USA Gymnastics. “We are excited to see our teams compete at the Olympics in GK’s outstanding apparel.”

GK Elite is also proud to outfit other gymnastics federations worldwide including Gymnastics Canada, Gymnastics Australia, Netherlands, and many more. For more information about GK Elite’s partnership with USA Gymnastics and presence at the Olympic Games Tokyo 2020, please visit gkelite.com.

About GK Elite
GK Elite is the world’s leading brand of gymnastics apparel and is recognized around the globe for superior variety, quality, fit and service. For over 35+ years, GK has been dedicated to the sport of gymnastics contributing millions of dollars to support hallmark grassroots gymnastics programs globally. Known for their signature collections of gymnastics workout leotards, GK has historically partnered with over 10 Olympic athletes and currently offers leotards designed by the most decorated American gymnast, Simone Biles, and 2016 Olympic gold medalist, Laurie Hernandez, and NCAA champion/social media sensation Katelyn Ohashi. Based in Reading, Pennsylvania, Elite Sportswear, L.P., the company behind the GK Gymnastics brand, continues its commitment to American-made quality and continuous innovation in designs for gymnastics apparel. Elite Sportswear, L.P. also owns, manufactures, and distributes a full line of swimwear under its brand, Dolfin Swimwear, and cheerleading apparel through Omni Cheer and All Star Cheer. For more information regarding GK, visit gkelite.com.

About USA Gymnastics
Based in Indianapolis, USA Gymnastics is the national governing body for gymnastics in the United States, encompassing seven disciplines: women’s gymnastics, men’s gymnastics, trampoline and tumbling, rhythmic gymnastics, acrobatic gymnastics, gymnastics for all (a.k.a. group gymnastics) and, most recently, parkour. USA Gymnastics sets the rules and policies that govern the sport of gymnastics, including supporting the U.S. Gymnastics Teams for the Olympics and World Championships; promoting and developing gymnastics on the grassroots and national levels, as well as a safe, empowered and positive training environment; and serving as a resource and educational center for the more than 200,000 members, clubs, fans and gymnasts throughout the United States. The organization is deeply committed to creating a culture that encourages and supports its athletes and focuses on its highest priority: the safety and well-being of athletes and our community.